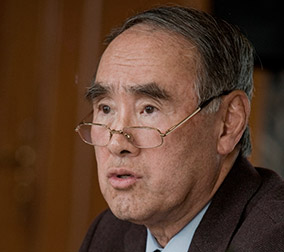 Hong-koo has had a distinguished teaching career as a Professor at Emory University in 1963, Case Western Reserve University from 1964 to 1967, and at Seoul National University from 1968 to 1988. He was President of the Korean Political Science Association from 1986 to 1988 and a member of the executive committee of the International Political Science Association.  He was a fellow at Woodrow Wilson International Center in 1973 and at Harvard Law School in 1974.

In 1988, Lee became Minister of National Unification where he dealt with the relationship between the two divided Korean states. From 1991 to 1993 he served as South Korean Ambassador to the United Kingdom. Also beginning in 1991, he was a member of the Commission of Global Governance until 1994. Hong-koo was elected Prime Minister of South Korea in 1994, serving until 1995.

After leaving office as Prime Minister, he was a member of the Korean National Assembly and Chairman of the New Korea Party. Lee later served as Ambassador to the United States from 1998 to 2000, and also as Chairman of the World Cup Bidding Committee which won Korea and Japan the right to co-host the 2002 World Cup.

Hong-koo is currently Chairman of the Board of The Seoul Forum for International Affairs and the East Asian Institute.