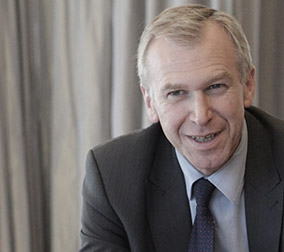 Mr Leterme has held the position of Secretary General of The International Institute for Democracy and Electoral Assistance (International IDEA) from 2014-2019. Between 2011-2014, Leterme served as Deputy Secretary General of the Organisation for Economic Cooperation and Development (OECD). Prior to joining the OECD, Prime Minister Leterme held a variety of political posts in Belgium at all levels and in all areas of government.

After starting his career as an Alderman in his home town of Ypres, he became a Member of Parliament in the Chamber of Representatives, Group Chairman and leader of the opposition, Secretary-General and Chairman of the CD&V party, Minister-President and Minister for Agriculture of the Flemish Government, Federal Senator, Deputy Prime Minister, Minister of the Budget and Mobility, Minister of Foreign Affairs and Prime Minister. During Leterme’s tenure as a Prime Minister, Belgium held the Presidency of the European Union. At a professional level, Yves Leterme has worked, inter alia, as a deputy auditor at the Belgian Court of Audit, as an administrator at the European Parliament, as Chief Investigator Financial Fair Play at UEFA, as Member of the Board of Directors of TeleColumbus AG, and Member of the GSC at Volkswagen AG.

At present, he is a partner at TheManagementLab (Geneva) and Chairman of Tojoy EMEA (Paris).