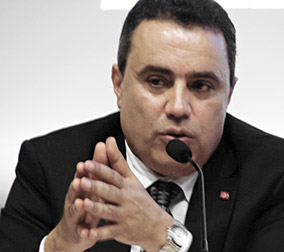 Mehdi Jomaa is a former Prime Minister of Tunisia who, as head of government, was in charge of completing the transition process with the ultimate objective of anchoring the country towards a democratic way.

Mehdi Jomaa was born in Mahdia, Tunisia, in April 1962; he received his Master’s Degree in Engineering in Tunisia (ENIT).

The switch from corporate to political career began in March 2013, when he was appointed Minister of Industry in Tunisia. In this capacity he initiated several policy changes including a new energy strategy with an increasing mix of renewable, high-added value industrial policy, rationalisation of energy subsidies, culture change and social responsibility in Tunisian large industrial groups.  In January 2014 and after several months of an acute political crisis, which stalled the transition process, he was elected by the National Dialogue Committee to lead the country and became the Head of Government.

As Head of Government, he introduced a new and innovative governance procedure based on a trilogy of “vision, strategy and leadership”. During his tenure in office, Mr Jomaa restructured and enhanced the capabilities of the security apparatus for a more efficient response to terrorism, launched the national economic dialogue  to build national consensus around priority fiscal and structural reforms. In September 2014 he organised a major investment conference entitled “Invest in Tunisia: Start-up Democracy”.

Mr. Jomaa is founder of a think tank “Tunisia Alternatives” aiming to work on various policy reforms and provides a high-level technical expertise on Reforms processes and Social Policies. Furthermore, he is holder of decorations of the Tunisian Order of the Republic and the German Order of Merit. He was awarded the 2014 Amadeus “Man of the Year” distinction from Morocco.