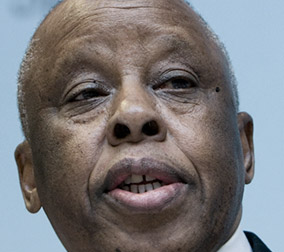 Festus Mogae held various positions in both domestic and international decision-making bodies. He started his career at the Ministry of Development and Planning of Botswana where he successively held the positions of planning officer, senior planning officer, director of economic affairs and permanent secretary. He was appointed Governor of the Bank of Botswana from1980-1981.

In 1982, he became Chief of Staff and Permanent Secretary to President Masire. Following the re-election of Mr. Masire in 1989, Festus Mogae was appointed Botswana’s Minister of Finance and Development Planning – position he hold until 1992. Mr. Mogae then became Vice-President of his country.

In November 1997, Mr. Masire announced he would not seek a third mandate. On 31 March 1998 he handed power over to Festus Mogae who remained President until 2008, then followed by Ian Khama.

His international career is mainly dominated by positions hold at the International Monetary Fund (IMF), the World Bank and the Southern Africa Development Community (SADC). He was recently appointed by UN Secretary-General Ban Ki-Moon as a Special Envoy on Climate Change, together with former President of Chile Ricardo Lagos and Ms Gro Harlem Brundtland, former Prime Minister of Norway.