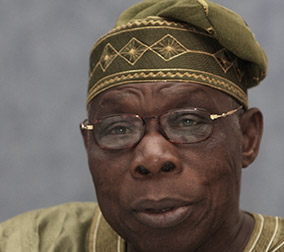 Mr. Obasanjo pledged to continue the restoration of civilian government and to carry forward the reform programme to improve the quality of public service. During the dictatorship of Sani Abacha, Mr. Obasanjo spoke out against the human rights abuses of the regime, and was imprisoned with the claim of planning a coup.

In the 1999 elections he decided to run for the presidency as the candidate of the People’s Democratic Party, PDP. President Obasanjo won the elections and was later re-elected in 2003. Within the period of his presidency, he played an instrumental role in bringing democracy back to the country. While leading a public campaign against corruption and implementing economic reforms in his country, he has been widely seen abroad as an African statesman championing debt relief and democratic institutions. President Obasanjo stepped down after the April 2007 elections won by Umaru Yar’Adua.

Mr Obasanjo was Chairperson of the African Union from July 2004 to January 2006 and, he has also  at different times served as Chairman of the Group of 77, Chairman of the Commonwealth Heads of Government Meeting, Chairman of the African Heads of State and Government Implementation Committee on NEPAD, and served on the African Progress Panel to monitor and promote Africa‘s development. Mr Obasanjo was also involved in international mediation efforts in Namibia, Angola, South Africa, Mozambique and Burundi. In 2008, United Nations Secretary-General Ban Ki-moon appointed President Obasanjo as his Special Envoy on the Great Lakes. And he has also been overseeing or consulted on the democratic elections of countries across the African continent especially on behalf of the African Union and ECOWAS.

He is Co-Chair of the InterAction Council. Council members jointly develop recommendations and practical solutions for the political, economic and social problems confronting humanity. President Obasanjo is the Chief Promoter of the Olusegun Obasanjo Presidential Library (OOPL), a unique project conceived in the mould of the American Presidential Libraries. OOPL remains the first of its kind in Nigeria and the first of such presidential libraries in the whole of the African continent. President Obasanjo is currently the Chair of the Africa Progress Group (APG) now domesticated in Nigeria and hosted at the OOPL, and a successor to the Africa Progress Panel originally located in Geneva under the auspices of the late Kofi Annan and Kofi Annan Foundation.