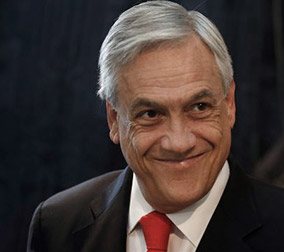 Born in Santiago, Chile on December 1, 1949. He graduated from the Pontifical Catholic University of Chile as a Commercial Engineer with a major in Economics, and he also has a Master and Doctorate degree in Economics from the University of Harvard.

In the early 1980s he created Bancard, granting Chilean people access to this new payment and credit system. He became a major shareholder in companies such as Lanchile, Chilevisión and Blanco y Negro (sports club), among others. He has been a founding member of Fundación Cultura y Sociedad, Fundación Mujer Emprende, and Fundación Avanza Chile.

President Piñera began his political career in 1988, during the Pinochet referendum. He voted against it, then joined the campaign team of the right-wing candidate. He was elected senator in 1990, and kept his seat until 1998. In 2001, Mr Piñera became president of the right-wing party National Revolution. He ran against Michelle Bachelet in the 2005 elections and received 25% of the votes cast; however, he did not make it to the second round, with 46.5% of the vote. He had to wait until 2009 to be elected President of the Republic, supported by the Coalition for Change, a union of the right.

After Mr Piñera’s first presidential term, he spent time on charitable work, including his Fundación Futuro, which supports education, culture and conservation in Chile. On March 11 2018 he was sworn President again, after beating Alejandro Guillier in the 2017 general elections. Following the end of his second term in May 2022,Sebastián Piñera continued being involved in  philanthropic projects through Fundación Futuro, Fundación Tantauco and Fundación Familia Piñera Morel.

He joined the Club de Madrid in 2014, after being ratified by the XIII General Assembly and is also a Member of The Dialogue.