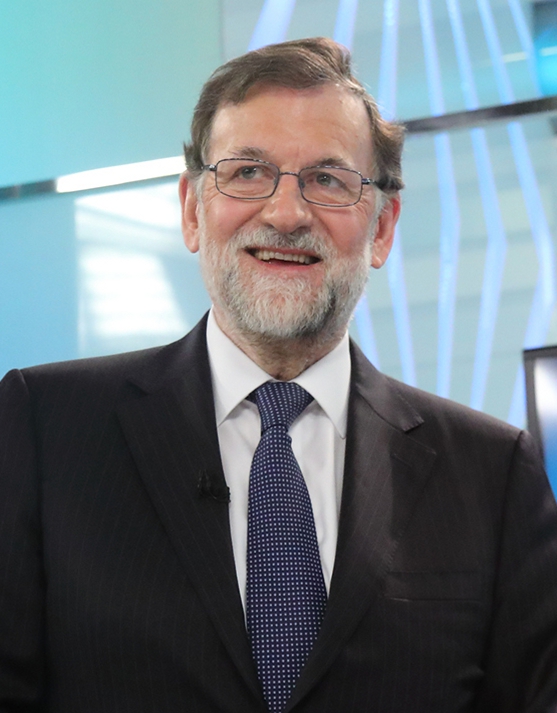 Mariano Rajoy is a former President of the Government of Spain (2011 to 2018). With a rich career, Rajoy has also served as Vice President, Spokesperson of the Government, Minister of the Presidency, of the Interior, of Education and Culture, and of Public Administration, among other public offices.

Rajoy studied Law at the University of Santiago de Compostela, in Galicia, where he graduated in 1978. He began his political career by joining the People’s Alliance (AP), the predecessor of the Popular Party (PP), and becoming a member of the Galician Parliament in 1981. In the general election of 1986, he won a seat in the Spanish Congress as the head of the AP’s list for Pontevedra, although he shortly resigned to assume as Vice President of the Regional Government of Galicia.

In 1990, he was named Deputy Secretary-General of the PP, a position that gave Rajoy a clear national standing. Afterwards, in 1993, he was re-elected to Congress, and from 1996, he served in the PP government of the new Spanish President, José María Aznar (1996-2004). Under President Aznar, Rajoy headed the Ministries of Education and Culture, and of Interior, among others, and was First Vice President of Spain between 2001 and 2003. In that year, Rajoy succeeded Aznar as party leader, thus becoming its candidate for the Presidency of the Government in the 2004 and 2008 general elections, both unsuccessful for the PP. However, in the 2011 election, the PP ousted the Spanish Socialist Workers’ Party (PSOE) government by achieving the biggest parliamentary majority in nearly 30 years. Rajoy’s Presidency, in his first term (2011-2015), was characterized by a major restructuration of the financial system and a deep labour reform, as a response to the international financial crisis that was affecting the country. However, his second term (2015-2018) was marked by economic recovery, a drop in unemployment rates and a push for independence in the region of Catalonia. As President, Rajoy oversaw the 2017–18 constitutional crisis, including the celebration of a Catalan independence referendum in 2017 (and the subsequent unilateral declaration of independence), all which led to the imposition of direct rule from Madrid.

After leaving office, Mariano Rajoy was reinstated to his position as property registrar in Santa Pola (Alicante), a job he held almost three decades earlier. Later, in April 2019, he became a Full Member of Club de Madrid. Additionally, Rajoy is an occasional speaker on the promotion of democracy, Spanish politics and foreign relations.