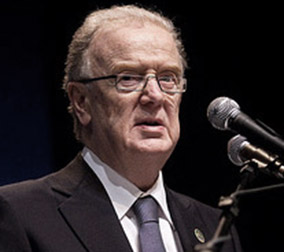 Jorge Sampaio graduated from Law School of the University of Lisbon, Portugal.

As a lawyer, Jorge Sampaio fulfilled directive functions in Law School. He worked as a Defence Lawyer for political prisoners in the Tribunal of Public Order of Lisbon. After the Carnation Revolution of April 25 1974, Jorge Sampaio funded MES, (Portuguese acronym for Social Left Movement) but abandoned the political project soon after. In 1978 he joined PS, the Socialist Party, where he remains to present day.

Jorge Sampaio was President of the Academic Association of the Law Department and one of the principle players of the denominated Academic Crisis of 1961 that constituted the origin of the long and generalized student protest that lasted until the 25 April 1974, and that profoundly shook up Salazar’s dictatorship.

In 1969 he was presented as a candidate for the elections of the National Assembly integrated in the lists of the Democratic Electoral Commission. During the years of the Revolution, he played an important role in the dialogue with the high moderator of the Armed Forces Movement being important his active support to the opposition of the “Grupo de los Nueve”. In March 1975, he was named Secretary of State of the External Cooperation and that same year founded the Socialist Intervention.

In 1978 Jorge Sampaio affiliated himself with the Socialist Party and one year later was elected as the Deputy of the Republican Assembly, aside from becoming part of the National Secretariat of the Socialist Party. From 1979 to 1984 he was a member of the European Commission of Human Rights in the European Council where he carried out important work in the defence of Fundamental Rights and contributed to a dynamic application of the principles contained in the European Convention of Human Rights. He was re-elected Deputy of the Republican Assembly in 1980, 1985, 1987 and 1991.

In the year 1989 he was elected the General Secretary of the Socialist Party and was named by the Republican Assembly member of the State Council. As Governor of Lisbon (1989-1996), Mr. Sampaio was President of the City Union of Portuguese Language (UCCLA) and elected vice-president of the Union of Ibero-American Cities in 1990. Also he became President of the Euro-Cities Movement (1990) and President of the World Federation of the United Cities (1992).

In 1995, Jorge Sampaio announced his wish to run for the presidency of the Republic. He won the election of 14 January 1996 in the first round against Aníbal Cavaco Silva and got re-elected five years later. As President, Sampaio’s actions were focused on social and cultural affairs. In the international political scene, he gave important publicity to the cause of East Timor’s independence.

Mr. Sampaio received two national orders, the first being Prince Henry el Navegante and the other Infante don Henrique. He published two compilation books on speech and reflection on different aspects of the Portuguese actuality; A festa de um sonho, (1991) and Um olhar sobre Portugal (1995), which together with his presidential interventions are compiled in the Portuguese books I, II, III, IV, V and VI. Sampaio collaborated habitually in diverse political magazines and Portuguese newspapers such as; Seara Nova, O Tempo and O Modo, República, Jornal Novo, Opção, Expresso, O Jornal, Diario de Noticias and Público, amongst others.