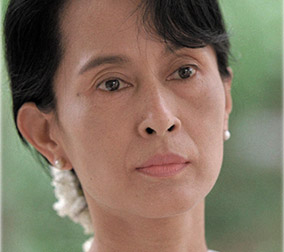 Daughter of the assassinated nationalist General Aung San, architect of the modern Burmese army and main negotiator of Burma’s independence with the British Empire, Daw Aung San Suu Kyi grew up in India and in the UK where she graduated in 1964.

From 1969 onwards, she worked for the UN at the New York headquarters in the Advisory Council for Administrative and Budget Matters, and then served for her country’s Ministry of Foreign Affairs in Bhutan.

In April 1988, she decided to put an end to 18 years of exile to look after her mother who lived in Rangoon and who was seriously ill. What she found was a country in full effervescence, with huge demonstrations urging for democracy and that the dictatorial regime was trying to counter with severe violence.

On August 26, 1988, Suu Kyi set her first meeting next to Rangoon’s Shwedagon pagoda. Her vibrant speech in front of half a million of people reflected the people’s aspirations of democracy and strengthened the confidence among demonstrations that saw the end of the regime just around the corner.

From one day to the other, Suu Kyi became the face and the voice of the Burmese revolution. She started travelling around the country to galvanize the protest movement. Her non-violence discourse reminded that of Mahatma Gandhi, although it largely followed Buddhist principles.

On September 18, 1988, the hopes for change were bitterly torn apart as the army took over the power through some sort of coup d’état. Six days later, looking towards the upcoming yet still hazy elections, Suu Kyi and two prominent regime defectors founded the National League for Democracy (NLD).

On July 20, 1989, after months of intimidation and harassment, Suu Kyi was put under house arrest in Rangoon. As a consequence, she was unable to take part in the May 27 elections, which her party overwhelming won with 58.7% of the votes.

Contrary to what it had promised, the junta rejected the results and announced that the elections had not been held to elect a legislative assembly but a constituent one. In this sense there would be no transfer of power to the civilian bodies until a new Carta Magna was produced.

While under house arrest and with no communication towards the outside world since July 1990, Suu Kyi showed once again her courageous character and proud determination, calling her fellow citizens not to give up and have faith in the final victory of the democratic cause.

Declared prisoner of conscience by Amnesty International, Suu Kyi’s fight for the Burmese drama not to be forgotten was rewarded by the Nobel Peace Prize Committee in 1991, which recognized her non-violent fight for democracy and human rights, and her being one of the most extraordinary examples of civil courage in Asia in the last decades.

Freed in 1995 but put again under house arrest in 2000 and in 2003 without charges or trial, Suu Kyi refused the exile she was offered and opted for sacrificing her freedom and family so as to keep advocating for non-violent resistance and urge for a democratic compromise with her captors. Her ongoing dialogue with the head of the junta, General Than Shwe, did not manage to moderate the regimen’s behaviour which also crushed with blood and fire the 2007 Saffron Revolution.

On November 13, 2010, six days after legislatives elections which she asked to boycott, the Lady, at 65 years of age, was eventually freed in Rangoon after years of international pressure on the regime.

In addition to the Nobel Peace Prize (1991), Suu Kyi received various others prizes and awards the Rafto and the Sakharov prizes.

The Burmese leader has also received doctorates honoris causa from various universities all around the world.