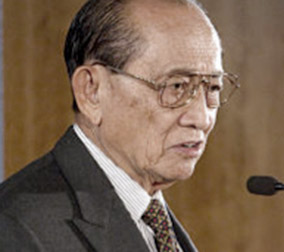 Place and date of Birth:

His government is remembered for steadfastly promoting the individual empowerment and global competitiveness. In 1993 he ended the power crisis that had devastated the Filipino people and crippled Filipino industry for two years. He created and implemented programs to fight poverty.

The Filipino economy recovered dramatically during the Ramos´ Administration. He implemented a comprehensive Social Reform Agenda (SRA) that addressed the long-standing problems of poverty, jobs and livelihood, health, education and skills training, housing, environmental protection, children and the youth, the elderly and the handicapped, agrarian reform, and access to equal opportunity. Gross National Product increased an average of 5 percent annually, and the average income of the Filipino family grew more during his administration than in the preceding two decades. He pushed for the deregulation of key industries and the liberalization of the economy, and encouraged the privatization of public entities, to include the modernization of public infrastructure through an expanded Build-Operate-Transfer (BOT) law. He achieved a peace agreement with military rebels and the secessionist Moro National Liberation Front (MNLF) for which he won the 1997 UNESCO Peace Award, the first awarded to an Asian national.

Currently,  Ramos belongs to over fourteen international organizations. On 12 April 2002, he was elected Chairman of the Boao Forum for Asia (BFA)—an intellectual resource center backed by 26 countries to help integrate the diverse Asian continent into “One Asia.” He is founder and Chairman of the Ramos Peace and Development Foundation.

He has received some 28 honorary doctorates, many of them from foreign educational institutions.  He also received the 2000 Distinguished Graduate Award from the U.S. Military Academy at West Point.  He is a veteran of the Korean and Vietnam Wars.