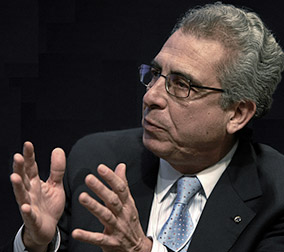 Ernesto Zedillo served as President of Mexico from 1994-2000.

President Zedillo holds a Bachelor’s degree from the School of Economics of the Natìonal Polytechnic Institute in Mexico and his M.A. and Ph.D. at Yale University. He is currently the Director of the Yale Center for the Study of Globalization; Professor in the Field of International Economics and Politics; Professor of International and Area Studies; and Professor Adjunct of Forestry and Environmental Studies at Yale University.

From 1978-87 he was with the Central Bank of Mexico; from 1987-88 he served the National Government of Mexico as Undersecretary of Budget; from 1988-1992 as Secretary of Economic Programming and Budget Education; and was appointed Secretary of Education in 1992. He was asked in August 2020 to serve on the Independent Panel on Pandemic Preparedness and Response (IPPPR), mandated by the World Health Assembly to analyze the Covid-19 pandemic’s early emergence, global spread, health, economic and social impacts, how it has been controlled and mitigated, and to support the international community by making recommendations for now and in the future.

He is a member of The Elders, an independent group of global leaders using their collective experience and influence for peace, justice and human rights worldwide and is Chairman of the Rockefeller Foundation Economic Council on Planetary Health. President Zedillo serves on the Global Commission on Drug Policy; the Beijing Forum Senior Advisory Council; the Kofi Annan Commission on Elections and Democracy in the Digital Age; the United Nations High-level Advisory Board on Economic and Social Affairs; and on the Selection Committee of the Aurora Prize for Awakening Humanity and the Hilton Humanitarian Award. Formerly, Mr Zedillo served as Chair of the Board of the Natural Resource Governance Institute and Co-Chair of the Inter-American Dialogue. He is a Member of the Group of 30, a consultative group on international economic and monetary affairs. In 2011 he was elected an international member of the American Philosophical Society.

His edited volumes include: Trade in the 21st Century: Back to the Past? (2021); Africa at a Fork in the Road: Taking Off or Disappointment Once Again? (2015); Rethinking the War on Drugs through the US-Mexico Prism (2012); Global Warming: Looking Beyond Kyoto (2008); and The Future of Globalization: Explorations in Light of Recent Turbulence (2008).