Upon receiving the honour, former President of Sri Lanka and Member of Club de Madrid (CdM), Chandrika Kumaratunga, made a speech reminiscing about her time as a student in France.

Thanks to a scholarship, Chandrika Kumaratunga studied in Sciences Po, a place that  “opened up new vistas for the unhindered development of my personality and my knowledge today, while giving me the opportunity for new experiences enriched with the eternal values of Liberty and Equality”, she said in her acceptance speech. “It gave me the possibility of learning of the beauty and necessity of diversity”, she added.

She also recalled how during her stay in France, ‘May 68’ exploded before her: “I was on the barricades, in demonstrations, organising workers to protest, engaged in passionate dialogues and meetings till the wee hours of the mornings. For me, “May ‘68” was a marvelous explosion of free thought, of fraternity between youth belonging to every community – ethnic, religious, political”. 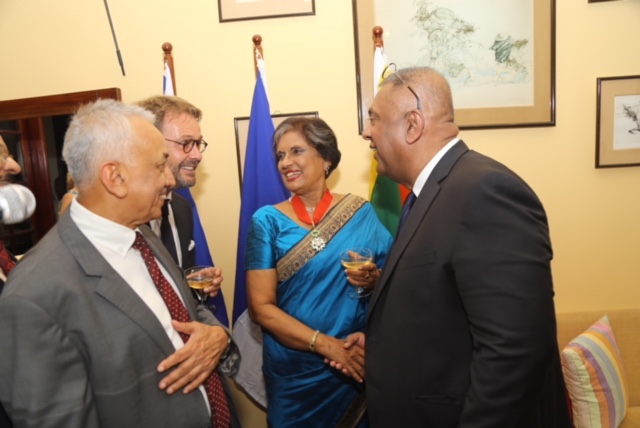 “The seeds of free and liberal thought were sown in me by my father, and forged in to a strong force on the barricades and in the debates of “May ‘68” and thereafter”, continued the Club de Madrid Member in an emotional speech that acknowledged the several influences she received in her political thought. She also had kind words for her family: “The ethical values I learnt from parents – values of Honesty at all costs, unswerving commitment to the causes I believe in, loyalty and friendship – were offered the opportunity to blossom fully, in the freedom of Parisian student life”.

Chandrika Kumaratunga then went on to dedicate the Honour of Commanduer de la Legion d’Honneur from the French Government to “all those like me, who dedicated their lives to realise our dream of building a better world” and to “the precious young lives of Sri Lanka sacrificed on the altar of needless violence against fellow humans”.