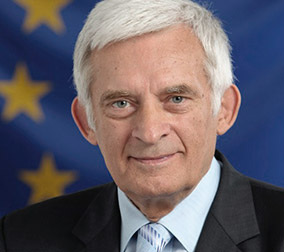 During his mandate, he presided over the transition from the Nice to the Lisbon Treaty, playing a key-role in the finalisation of the ratification process. He was also very active on the energy front, launching together with Jacques Delors the initiative of a European Energy Community aimed at strengthening legal certainty and energy cooperation within and outside the EU.

From 1997 to 2001, Jerzy Buzek was Prime Minister of Poland, introducing sweeping reforms in pensions, healthcare, local and regional administration, education and the mining sectors. During his government Poland acceded to NATO and made key-steps towards EU membership.

A chemical engineer by formation, Buzek joined the Solidarność movement from its early days, becoming the Chair of the Works Committee, and later Chairman of the fourth, fifth and sixth national Congresses.