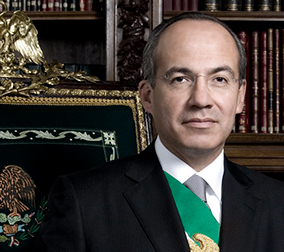 Felipe Calderón Hinojosa was born on 18 August 1962 in Morelia, in the State of Michoacán, Mexico.

Felipe Calderón received his bachelor´s degree in law from the Escuela Libre de Derecho in Mexico City.  He went on to obtain his Master´s in economics from the Instituto Tecnológico Autónomo de México (ITAM).  In 2000 Mr. Calderón received a Master of Public Administration degree from the John F. Kennedy School of Government at Harvard University.

Felipe Calderón entered politics in his early twenties, serving as the president of the Partido Acción Nacional (PAN) youth movement.  He went on to serve in México’s Federal Chamber of Deputies, and acted as the national chairman for the PAN party from 1996 to 1999.  Under the presidency of Vicente Fox, Felipe Calderón was appointed as the director of the state-owned development bank, Banobras, as well as the Secretary of Energy. In 2006, Mr. Calderón was elected President of México.  His presidency was marked by his decision to declare war on México’s drug cartels.  In the years up to his presidency, Mexican cartels had been shipping narcotics across the Americas, both north and south of Mexico.  Felipe Calderón holds several titles given to him from countries ranging from Brazil to the United Kingdom.  Such titles include, the Knight Grand Cross of the Order of Bath –received from Queen Elizabeth II, Knighthood of the Order of the Elephant – received from Queen Margrethe II of Denmark, and the Grand Cross with Collar from the Order of Isabel the Catholic – received from King Juan Carlos I of Spain.