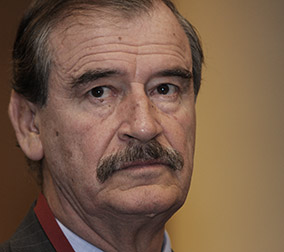 Vicente Fox is a former President of Mexico (2000 to 2006). After 71 years of national governments of the same party, Fox was the first president from the opposition. His victory marked a before-and-after in Mexico’s democratic and institutional life.

A businessman, President Fox was born in Mexico City on July 2, 1942. He graduated from the Universidad Iberoamericana in Mexico City with a Bachelor’s Degree in Business Administration (1964) and obtained a diploma in Top Management Skills from the Business School of Harvard University (1974). In 1964 Mr. Fox began working as a route supervisor for the Coca-Cola Company. His career with the company developed very rapidly and from 1975-1979 he was serving as Chief Executive of Coca-Cola in Mexico.

After retiring from Coca-Cola in 1980, President Fox returned to Guanajuato to help run the family business. Being actively involved in civil society, Vicente Fox was President and Founder of Casa Cuna Amigo Daniel Board, an institution where many children receive care and affection; President of the Loyola Board, promoter of the Universidad Iberoamericana, Campus León, and the Lux Institute, a Jesuit educational centre.

In 1988 Vicente Fox joined the Partido Acción Nacional. That same year, he ran for and was elected as federal deputy for District 3 of Guanajuato for the LIV Legislature. In 1995 Mr. Fox was elected Governor of Guanajuato state. Due to the success of his governance, Mr Fox was elected candidate to be President of the Mexican Republic as a recognized person of the Alianza por el Cambio (PAN-PVEM) for the 2000 elections. On July 2 and on his 58th birthday, he won the presidential election with 43% of the votes. A year after winning the presidential election on July 2, 2001.

During his presidency, Mexico earned a temporary position in the UN Security Council. Fox’s priorities as President were improving the Mexican economy, mainly through better trade relations with the United States, banking reforms and tackling crime and corruption; increased bilateral cooperation with the United States on drug trafficking and illegal immigration; and strengthening the rights of Mexico’s indigenous peoples.

Currently he lives in his ranch ex-Hacienda San Cristobal, now is the house of the Centro de Estudios, Biblioteca y Museo Vicente Fox  Quesada, A.C., known as Centro Fox. The latter consists mainly of 2 projects: “Orchestra and Community Ensembles of Centro Fox”, where children from San Cristobal and surrounding communities learn, live and grow in a musical environment; and the program “President For A Day”, a playful leadership experience and decision making for any age. He is also actively involved in “ Vamos Mexico Foundation”, dedicated to fight poverty, chaired by his wife Marta Sahagun. In 2012 he became a member of the Global Leadership Foundation.