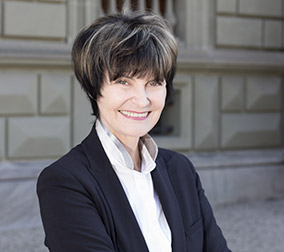 Micheline Calmy-Rey was born on 8 July 1945 in Sion in the Canton of Valais.

She studied at the Graduate Institute in Geneva where she obtained a Master’s degree in Political Science. For 20 years, she ran a small enterprise active in the book- distribution business.

As deputy of the Social Democratic Party, she was member of the Parliament of the Canton of Geneva from 1981 to 1997. During her mandate, she chaired the local Parliament and assumed the presidency of its finance committee. In 1997, she was elected to the Geneva Cantonal Government and took over as Head of the Department of Finance. She assumed the office of President of the Cantonal Government from 2001 to 2002.

Micheline Calmy-Rey was elected to the Federal Council on 4 December 2002. She served as head of the Federal Department of Foreign Affairs (FDFA) from 2003 to the end of 2011, where she pursued an active foreign policy marked by a commitment to broadening and developing relations between Switzerland and the European Union (EU) by strengthening and enhancing the so-called bilateral way. She has promoted a stronger presence of Switzerland beyond the European continent, in particular in Asia and Africa, and has pursued a policy of active neutrality promoting peace, fostering respect for human rights, and advancing the fight against poverty. Amongst the highlights of this policy, it is worth mentioning the launch of the Geneva Initiative, the decisive contribution to the creation of the Human Rights Council, the independence of Kosovo, the mediations between Armenia and Turkey, Georgia and Russia as well as the adoption of the Third Additional Protocol to the Geneva Conventions which allowed the “Magen David Adom” to enter the International Federation of Red Cross and Red Crescent Societies.

In 2007 and in 2011, Micheline Calmy-Rey assumed the office of President of the Swiss Confederation for a one year term. In 2010, she took up the presidency of the Council of Europe and chaired the Ministerial Conference of the Francophonie in 2010 and 2011.

In May 2012, she was nominated visiting professor at the University of Geneva. She is member of the board of Governors of the « International Crisis Group », « Geneva Call » and President of the « Martin Ennals Awards » Foundation.

Micheline Calmy-Rey is married and has two grown children as well as three grandchildren.