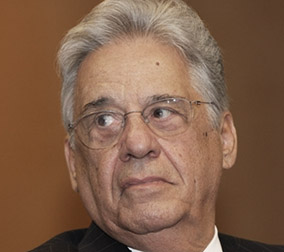 Date and place of Birth:

Mr. Cardoso began his political career when he was elected alternate Senator for the state of Sao Paulo for the Brazilian Democratic Movement in 1978, serving until 1979. In 1983, he was elected senator and in 1985 became the Leader of the Brazilian Democratic Movement in Congress. In 1988 he was among the founders of the Social Democratic Brazilian Party (SDBP). Mr. Cardoso served as the President of the Parliamentary Commission for Territory Administration, Local Power and Environment from 1985 to 1988.

He was the opposition leader for the SDBP in the Senate from 1990-1991 and in 1992 was named Minister for Foreign Affairs under the Itamar Franco administration. In 1993-1994 he served as Minister of Finance and was credited with successfully controlling inflation and turning the troubled Brazilian economy around through his Plan Real.

Mr. Cardoso is currently a professor-at-large at the Thomas J. Watson Jr. Institute for International Studies at Brown University, Honorary Member of the Club of Rome, and Member of the Círculo de Montevideo, Collegium International, the Elders Group and of the Inter-American Dialogue. He is also a member of the Board of Trustees of the Institute for Advanced Study, Princeton. He holds the “Cultures of the South” chair at the Library of Congress, Washington D.C.

Fernando Henrique Cardoso is the recipient of numerous Doctorates Honoris Causa from universities in the United States, Venezuela, Chile, Portugal, Spain, Germany, France, Italy, England, Slovakia, Russia, Israel, and Japan. He is a Foreign Honorary Member of the American Academy of Arts and Sciences and has received many other honors, including the Prince of Asturias Award for International Cooperation (2000), the UNDP’s Mahbub ul Haq Award for Outstanding Contribution to Human Development (2002) and the J. William Fulbright Prize for International Understanding (2003). He has written numerous books including Dependency and Development in Latin America (with E. Faletto, 1979) and Charting a New Course: The Politics of Globalization and Social Tansformation (2001, M.Font editor).