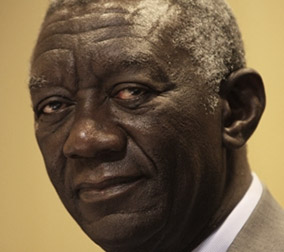 Mr. Kufuor was called to the Bar at Lincoln Inn, London (1959-1961) and obtained an Honours Degree in Philosophy, Politics and Economics from Exeter College, University of Oxford (1961-1964).

Mr. Kufuor started his career as a private law practitioner in 1965 in Kumasi. As of 1967, he started his Public Service career as a Chief Legal Officer and City Manager of Kumasi, the second city of Ghana. In 1968, he was elected member of the Constituent Assembly to write the constitution of the second Republic of Ghana. In 1969, he was elected Member of Parliament and was appointed Deputy Minister of Foreign Affairs, by the then Prime Minister, Professor Kofi Abrefa Busia. In this position, he led Ghana’s delegation to UN General Assembly, the Organization of African Unity’s meetings in Addis Ababa and the Summit Conference of the Non-Aligned Movement in Lusaka in 1970.

In 1979, he was returned to Parliament and appointed the Spokesman on Foreign Affairs and Deputy Opposition Leader of the Popular Front Party (PFP) Parliamentary Group during the Third Republic.

In January 1982, John Kufuor accepted an invitation from the Provisional National Defence Council (PNDC) to serve in what was purported to be a National Government. Mr. Kufuor was appointed the Secretary for Local Government in this new government. Seven months later, however, Mr. Kufuor resigned from his position and came back to private business for a few years.

John Kufuor returned to the forefront of Ghana politics in the 1990s. In 1996, Mr. Kufuor was nominated by the New Patriotic Party (NPP) to run for President but lost to incumbent Jerry John Rawlings. In 1998, he was re-nominated by the New Patriotic Party to run again for President of the nation. He won the presidential election of December 2000 and was sworn-in as president on the 7th January 2001. He was re-elected for a second term in 2004. He ended his tenure as constitutionally mandated on 7th January 2009.

He served as Chairman of the regional grouping ECOWAS for two consecutive terms – 2003 and 2004. In 2007, Mr. Kufuor was elected Chairperson of the African Union.

John Kufuor is since October 2009 the Chairman of Interpeace, an international peacebuilding organization based in Geneva.