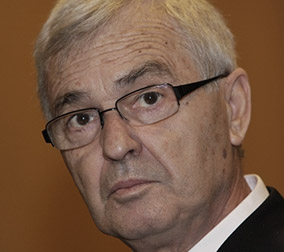 Rexhep Meidani has had a distinguished teaching career, working as an Assistant Professor in the Department of Physics at Tirana University (1966), and as Professor and Lecturer in Quantum Mechanics, Solid State Physics, and Theoretical and Statistical Physics at Tirana University (1976-1996). Between 1977 and 1980, he also taught at the University of Pristina in Kosovo and has been a visiting lecturer and scientist at universities in Italy, Germany, and England. He was a guest lecturer at Dallas University and Boston University in 1992.

Mr. Meidani entered politics in the 1990s, and became chair of the Central Election Commission (CEC) in the first multiparty elections in 1991. That year, he also became a member of the Presidential Council. He became involved in civil society, serving as Chairman of the Board of the Albanian Center for Human Rights from 1994 to 1996. In 1996 he joined the Socialist Party and was elected its Secretary General, where he served until 1997.

In 1997 Rexhep Meidani was elected President, serving until 2002. During his time in office, he played a crucial role in safeguarding his country’s nascent democratic institutions and facilitating its economic revival. He also played a key role in the adoption and implementation of the Stability Pact for South Eastern Europe, a measure designed to foster peace, democracy, and economic development in the Balkans. Since 2003 he has been a member of the Steering Committee of the Socialist Party. In 2006, he co-lead the mission of the International Observer Delegation to the Palestinian Legislative Council Elections.

Mr. Meidani is the author of several books and many monographs and articles that have been published in both Albanian and international scientific journals. Since 2011 he is Member of the General Advisory Board of the ICD (Institute for Cultural Diplomacy, Berlin).