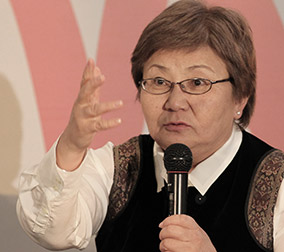 Education: Roza Otunbayeva graduated from the Philosophy Faculty of Moscow State University in 1972. She was a senior professor and head of the philosophy department at Kyrgyz State National University.

In 1981 Ms Otunbayeva began her political career as the Communist Party’s second secretary of the Lenin raion council (raikom) of Frunze. In late 1980s, she served as head of the USSR Delegation to UNESCO in Paris, and later as the Soviet Ambassador to Malaysia. By 1992, the now independent Kyrgyzstan was led by Askar Akayev, who chose her to be both Foreign Minister and Deputy Prime Minister; positions she held until later that year when she became her country’s first ambassador to the USA and Canada.

In 1998-2001, she served as the first Kyrgyz ambassador to the United Kingdom. In 2002-2004, she was the deputy head of the United Nations Observing Mission in Georgia. Upon her return to Kyrgyzstan in late 2004, she and three other opposition parliamentarians founded the Ata-Jurt (Fatherland) party in preparation for the February 2005 parliamentary elections.

She was barred from becoming a candidate for the 2005 legislative election due to a previously enacted law requiring prospective MPs to have resided in the country for 5 years prior to the elections. Her time as ambassador to the United Kingdom prevented her from meeting this criterion.

Otunbayeva was one of the key leaders of the Tulip Revolution in Kyrgyzstan which led to the overthrow of President Akayev. She also played a key role in November 2006 protests that pressed successfully for a new democratic constitution. In December 2007, Otunbayeva was elected to the parliament of Kyrgyzstan on the candidate list of the Social Democratic Party of Kyrgyzstan.

On April 7, 2010, Roza Otunbayeva was selected by opposition leaders as head of a Kyrgyz interim government, following widespread rioting in Bishkek and the ousting of President Kurmanbek Bakiyev who left the country on April 15.

Following a referendum of the new Kyrgyz Constitution, she was officially sworn in as President of the Republic on July 3, 2010, serving until December 2011.