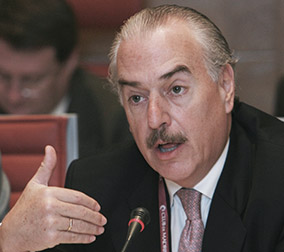 Andrés Pastrana graduated in Law from the Colegio Mayor Nuestra Señora del Rosario of Bogotá in 1977 and studied International Law at Harvard University in 1978.

In 1978 Andrés Pastrana co-founded and directed the Guión Review and in 1979 he founded the Hoy television news program. He was also president of the American Section of the International Union of Local Authorities from 1988 to 1989.

Mr. Pastrana is the son of former Colombian President Misael Pastrana and has had a sense of public duty from a very young age. He entered politics in 1982, serving as City Councilor of Bogotá until 1986, and from 1984 to 1985 he also served as President of the City Council of Bogotá.

In 1988, Mr. Pastrana was elected the first Popular Mayor of Bogotá, after surviving a kidnapping attempt ordered by the Cartel of Medellín. His administration succeeded in lowering crime rates in the capital, combating drug addiction, privatizing sanitary services, supplying drinking water to the poorest sectors of society, improving transportation and promoting education. Andrés Pastrana´s time in office was also characterized by stability and law and order. He served as mayor until 1990.

Mr. Pastrana founded the New Democratic Force movement in 1991, and succeeded in winning a seat in the Colombian Senate. He served in the Senate until 1993. In 1998, He was elected President of Colombia for a four-year term.

After his presidential tenure, he served from 2005 to 2006 as the Colombia Ambassador to the United States.

Mr. Pastrana is Honorary President of the Unión de Partidos Latinoamericanos (UPLA). In July 2015 he was appointed as President of the Centrist Democrat International an institution that brings together 76 Christian Democrat and Social Christian political parties from all continents

Andrés Pastrana is the recipient of numerous international awards, including journalism prizes from Spain and Colombia.