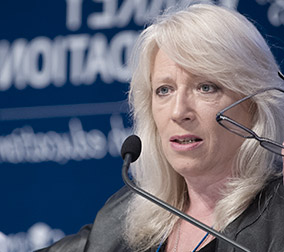 Iveta Radicova is a former Prime Minister of Slovakia. She served for one successive term from 2010-2012.

Born on 7 December 1956 in Bratislava, Slovakia, Ms Radičová holds a PhD and Professor in Sociology from Comenius University Bratislava.

As the Vice-Chairwoman of the Slovak Christian Democratic Union – Democratic Party (SDKÚ-DS) she has been responsible for social affairs and healthcare since 2006. In former positions, she served as deputy Chairman of the Parliamentary Committee on Social Affairs and Housing at the Slovak National Parliament (2006-2009), as Minister for Labor and Social Affairs of the Slovak Republic (2005-2006) and as an expert for social policy at the European Commission.

Iveta Radičová has devoted most of her professional career to social and family policies. In 1992, she founded the non-profit Social Policy Analysis Center, which she headed until being appointed Director of the Slovak Academy of Science’s Institute of Sociology in 2005. Since 2017 she is a Dean at Paneuropean University and European Coordinator at European Commission. She has taught as a visiting professor at universities in Austria, Belgium, Czech Republic, Finland, Sweden, UK and the U.S.A.

Iveta Radičová was a Fellow for the Media and Democracy in Central and Eastern Europe project at Oxford University in 2013. She has advised various government bodies on social and family policies, participated in the approximation of European legislation in the area of employment and social affairs before Slovakia’s accession to the EU and has also carried out studies on poverty for the World Bank. She has published and edited numerous books and studies mapping the transformation of the social system in Slovakia and other post-socialist countries.

She is currentlyEuropean Coordinator for the TEN-T Mediterranean Corridor and  is a member of the World Council for Women Leaders.