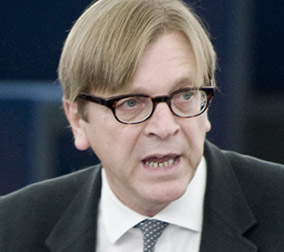 In 1970 Mr. Verhofstadt graduated from the Ateneo Real of Ghent with a License degree in Classical Languages. He obtained a License in Law in 1975 from the University of Ghent.

Four years later, he assumed for second time the Presidency of the Party and since November 1992 he led its transformation.

After being ousted from government, he became leader of the Flemish opposition and changed the PVV into the Vlaamse Liberalen en Democraten (VLD).

Guy Verhofstadt disappeared from the political scene in 1992 but he returned to the party’s presidency in 1996 and was member of the Committee of Rwanda for the examination of the events surrounding the 1994 Genocide in Rwanda.