GUY VERHOFSTADT: “IN A WORLD WHERE AN ALGORITHM DETERMINE ALL OUTCOMES, POLITICS NO LONGER EXITS.”

Citizen access to information is a fundamental pillar of a democratic society. The exercise of political rights – from electing leaders to expressing policy views – requires people to have ready access to reliable, balanced and complete information on current affairs, government action and political actors. In 2015-2018, through the Next Generation Democracy project, World Leadership Alliance – Club de Madrid (WLA – CdM) identified the flow of information through new technologies and social media as one of the main drivers of democracy around the world in the next decade – for good and for bad.

Guy Verhofstadt, former PM of Belgium and Member of WLA – CdM, just wrote an op-ed for the media organization Project Syndicate about digital literacy. New technologies and social media open new channels of citizen participation and engagement in elections and governance, but they bring about new challenges too. In words of Verhofstadt, “in a world where an algorithm determines all outcomes, politics no longer exits.” Threats to information integrity generate increasing concerns among the global democratic community. “If you look at your Facebook news feed, you will see almost only stories that reinforce your own political views,” pointed Verhofstadt. He added, “The problem is that because these tech giants’ “core business” tends to treat users as the product, not the customer, they have also acquired enormous amounts of personal data. Thus, whatever type of services these firms offer is largely irrelevant next to the real issue at hand: the concentration of control over personal information.”

Last February, WLA – CdM co-host the North America Next Generation Democracy Roundtable. The event held in San Francisco WLA – CdM Members, IT sector leaders, policy experts and political thinkers, in a joint analysis of the impacts of new technologies and social media on democracy. Through a new project on Information Integrity and the Future of Democracy, WLA – CdM now proposes to leverage the political influence of its Members to convene global, multi-stakeholder discussions on this subject, and allow for the formulation of practical, consensus-based policy recommendations to guide future actions in this area. According to Verhofstadt, “there is no time to lose. The world needs a new Internet, and Europe, in particular, needs a new digital strategy – one that is not simply copy-pasted from the American model.

Online anonymousness, zero-cost publishing and pay-per-click business models have favored the propagation of fake news, hate speech, extremist and polarizing ideas that would have met more hurdles in the non-digital world. The use of content algorithms pushes online citizens away from healthy debates into ideological one-sidedness. In some authoritarian contexts, the application of censorship filters has both reduced the potential for social media to serve as an alternative outlet for free speech. “If we want to put the Internet back in the hands of the people, they will need the digital literacy to manage it (…) Digital technologies know no political borders,“ advised the former PM of Belgium.

The Global Governance for Information Integrity Roundtable -which will be held on 27 September 2018 in Riga, Latvia-, will be the first activity of the new Information Integrity and the Future of Democracy project. It is being organised jointly with the Latvian Ministry of Foreign Affairs and in consultation with the Latvian Association of Political Science and the NATO Strategic Communications Center of Excellence. Its deliberations will feed into the Riga Conference 2018, organised jointly by the Latvian Transatlantic Organization, the Ministry of Defense and the Ministry of Foreign Affairs. 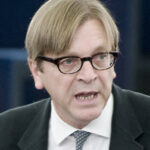