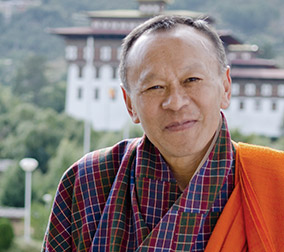 Born in Bhutan in 1952, Jigmi Y. Thinley graduated with an honors degree from St. Stephen’s College of Delhi University and went on to obtain a Master’s degree in public administration from Pennsylvania State University in 1976

Having begun service as a civil servant, he rose to positions of Permanent Secretary and regional governor. He was appointed ambassador/Permanent Representative to the UN in New York. Later he served as Permanent Representative to the UN in Geneva during which he was simultaneously accredited ambassador to the EU and several European countries before successive appointments as Foreign Minister and Home Minister. His pre-democracy career ended with appointment to two single-year terms as Prime Minister by the King in 1998 and 2003. Thereafter, Mr. Thinley founded a broad based liberal political party and formed the first government in the multiparty democracy.

Prime Minister Thinley is the foremost advocate of Gross National Happiness (GNH), a holistic development philosophy that has guided Bhutan’s transformation process since the early ‘70s. In April 2012, he convened a very successful ‘High Level Meeting’ at the UN HQs in New York on ‘Wellbeing and Happiness: Defining a New Economic Paradigm’. That same summer Bhutan spearheaded the UN General Assembly resolution that declared 20 March as the International Day of Happiness and called on the Secretary General to submit a report on the state of world happiness. Concurrently, the High Level Meeting inspired the annual publication of The World Happiness Report (WHR) by the Sustainable Solutions Network based at Columbia University.

Under his leadership Bhutan took an active part in the ongoing international discourse in the search for an integrated, inclusive and sustainable development paradigm. During his terms as Prime Minister and Chairman of Bhutan’s National Environment Commission, his country pledged to remain forever carbon neutral at COP 15 in Copenhagen. Among the many other initiatives taken by his government was the hosting of a “Climate Summit for a Living Himalayas” in 2011.

Mr. Thinley is a recipient of many national and international awards including his country’s highest civilian decoration. He is a member of Club de Madrid (CdM) and Asian Peace and Reconciliation Council and Senior Advisor to the World Happiness Report 2022.