Kjell Magne Bondevik, former PM of Norway & Member of World Leadership Alliance – Club de Madrid (WLA – CdM), travelled to Bishkek (Kyrgyzstan) in an effort to support the inclusion of persons with disabilities in the country’s labour market. The mission, lead by WLA – CdM, is part of the INSPIRED+ project, which aims to support the implementation of core UN Human Rights and International Labour Organization (ILO) conventions in nine countries benefiting from GSP+ status.

Our member Kjell Magne Bondevik joined the National Conference on the Economic Rights of Persons with Disabilities to share his experience and gave an overview of key policies in the area in both Norway and Europe. He encouraged government officials and ministers to set aside medical and budgetary considerations and frame the inclusion of persons with disabilities as a question of human value, and therefore, of equality.

“It is possible to return to a job after having suffered a mental health problem”, said PM Bondevik in front of an audience composed primarily of persons with disabilities. He was speaking from experience, as the former Prime Minister candidly recalled that he endured depression while in office and had to take a hiatus from running the country.

During the conference, participants – around 40 representatives of persons with disabilities, civil society organizations and the Minister of Labour and Social Development – ratified the Roadmap for Reform for the Integration of People with Disabilities. Carefully crafted with inputs from individuals with disabilities, representatives from NGOs, government agencies and businesses, this guideline will serve as an inspiration for meaningful reform in the country. 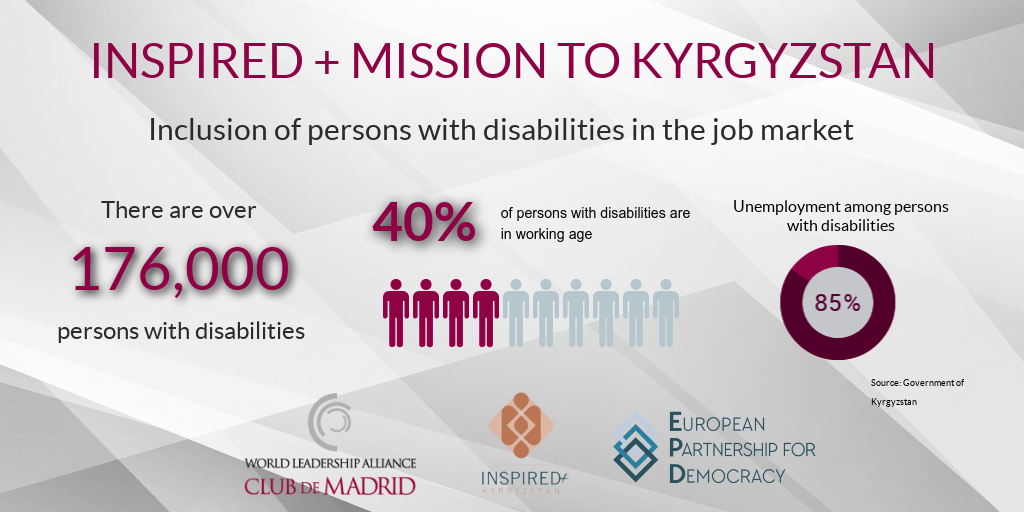 Accordingly, the Roadmap for Reform was later on presented at the Ministry of Labour in a large gathering with over 80 public servants, as well as the Minister herself, who had been highly committed to the dialogue process. The Minister of Labour said that the Roadmap would constitute the point of departure for the development of a strategy aimed at the fulfillment of the 2030 Agenda, adding that the considerations in the Roadmap would become indicators of compliance.

The key recommendations for legislative reform contained in the Roadmap were equally shared with members of the Jogorky Kenesh (the Kyrgyz Parliament) who are on the Standing Committee on Social Issues.

Kyrgyz PM Muhammetkaliy Abulgaziyev said in a meeting with PM Bondevik that the government was “taking the first steps” that would lead to the ratification of the UN Convention of the Rights of Persons with Disabilities, news that were very positively received by the organisers and partners of INSPIRED+. Our member Bondevik emphasise before the Kyrgyz PM that costs of ratification can be distributed on a step-by-step-basis, over a period of time, but that ratification itself is doubtless a powerful incentive toward more positive steps.

During the mission PM Bondevik also found time to have dinner with business leaders from Kyrgyzstan, with whom he discussed possible incentives for companies to hire persons with disabilities, and met with the local Rotary Club.