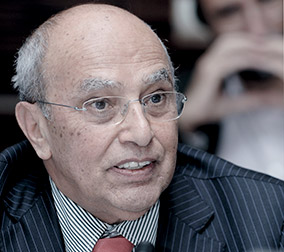 Dr. Al-Eryani earned a B.Sc. and an M.S.c. in Agriculture from the University of Georgia in 1962 and 1964, respectively. He received his PhD. in Biochemical Genetics from Yale University in 1968.

Dr. Al-Eryani led agricultural projects for development such as the Wadi Zabib Irrigation Project from 1968 to 1972 and later he held the position of Chairman of the Central Planning Committee (1972-1974). He was appointed Head of Sana’a University in December of 1976.

Dr. Al-Eryani became Minister of Development in 1974, a position which he held until 1976. He has advised, chaired and directed numerous foundations and organizations dealing with development, including the Kuwait Fund for Arab Economic Development.

Since 1995 Dr. Al-Eryani held the position of Secretary General to the General People’s Congress Party (GPC). He became Vice Prime Minister and Minister of Foreign Affairs in 1997 until 1998. He was then elected Prime Minister for a second term and left office in 2001. He was one of the contributors to the Arab Human Development Report 2004 and currently serves as a political advisor to the Yemeni President.

In 2007 he was elected Secretary General of the Arab Association for Democracy, a nongovernmental organization with membership from 17 Arab countries.