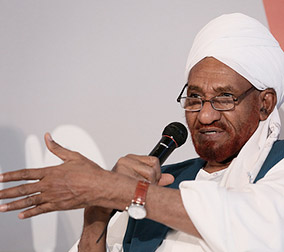 Degree and MSc in Economics, Politics and Philosophy from the School of Economics at Oxford University.

Al-Mahdi began his career in politics at the Ministry of Finance where he worked from 1957-1958. He left the Ministry to protest the coup d´état of 1958. In 1961 Al-Mahdi was chosen president of the Unified National Front opposition party. His leadership of the opposition contributed to the downfall of the Aboud dictatorship in 1964.

Al-Mahdi was elected president of the Umma party in November 1964, and led a campaign to promote political activity, develop political Islam, and reform the party by expanding its base and promoting democracy behavior. Despite his efforts towards a democratic government, there was another coup d´état in 1969 that led to a dictatorship referred to as the May Regime.

He was soon arrested by the military government, exiled to Egypt, and detained in Sudanese prisons repeatedly until 1974. Later that year, he traveled abroad and toured Arab and African Capitals where he delivered a number of lectures. While in exile, he formed the National Democratic Front (NDF), comprised of Umma, the Democratic Unionist Party, and the Muslim Brotherhood. Through his efforts, the NDF was able to make an accord of national reconciliation in 1977 with the May Regime that mandated democratic reform.

The accord had little effect, and Al-Mahdi continued his democratization efforts despite his arrest in 1983. He was released in December 1984, and led the opposition from within that drove the revolution of April 1985. He was soon elected President of Umma and won the general elections for the Prime Minister of Sudan in 1986, a position he retained until the government was overthrown in 1989.

After being detained, imprisoned and tortured, Al-Mahdi when into exile to lead the opposition in 1996, but returned to Sudan in 2000. In 2002 he was elected as the IMAM (religious leader) of ALANSAR and in 2003 he was re-elected President of Umma and signed the Cairo Declaration for peace and democratic transformation with the Sudan Peoples Liberation Movement/Army (SPLM/A) and the Democratic Unionist Party (DUP). The Khartoum Regime initially welcomed but later refused to implement the Declaration. Currently, Al-Mahdi continues his mobilization efforts to restore peace and democracy to Sudan, and to solve the dialectic between modern life and religious revival in the Muslim World.

He is the author of tens of books and booklets covering different topics with focuses on democracy, Human Rights, development, authenticity and Islamic Revival, including The Southern Question (1964); Speeches in Exile (1976); Questions on Mahadism (1979); Legitimate Penalties and Their Position in the Islamic Social System (1987); Democracy in Sudan: Will Return and Triumph (1990); Challenges of the Nineties (1991); and We Laughed in Sad Circumstances(unpublished), among many others. He is also a weekly columnist in ALSHARQ ALAWSAT Newspaper, London.