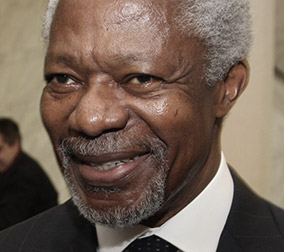 Mr. Annan began studying for a degree in Economics at the Kumasi College of Science and Technology, now the Kwane Nkrumah University of Science and Technology of Ghana. He received a Ford Foundation grant, enabling him to complete his undergraduate studies at Macalester College in St. Paul, Minnesota, USA (1961). Mr. Annan then did a DEA degree in International Relations at the Graduate Institute of International Studies (Institut Universitaire des Hautes Etudes Internationales) in Geneva (1961-1962), later attending the MIT Sloan School of Management (1971-1972) Sloan Fellows Program and receiving a Master of Science degree.

Kofi Annan started his career as Budget officer for the World Health Organization, an agency of the United Nations. From 1974 to 1976, he worked as Director of Tourism in Ghana. He then returned to work for the UN as an Assistant Secretary-General in three consecutive positions: Human Resources, Management and Security Coordinator from 1987 to 1990; Program Planning, Budget and Finance, and Controller, from 1990 to 1992; and Peacekeeping Operations, from March 1993 to February 1994.

On 13 December 1996, Kofi Annan was recommended by the United Nations Security Council to replace the previous Secretary-General, Dr. Boutros-Ghali of Egypt, whose second term faced the veto of the United States. He was confirmed four days later by the vote of the General Assembly, and he started this first term as Secretary-General on 1 January 1997.

One of Mr. Annan’s main priorities as Secretary-General was a comprehensive program of reform aimed at revitalizing the UN making the international system more effective. He was a constant advocate for human rights, the rule of law, the Millennium Development Goals and Africa, and sought to bring the organization closer to the global public by forging ties with civil society, the private sector and other partners.

Since leaving the UN, Mr. Annan has continued to advocate for better policies to meet the needs of the poorest and most vulnerable, particularly in Africa. In 2007, Mr. Annan accepted the invitation of the Swiss Government to become President of the Global Humanitarian Forum – a Forum which seeks to promote dialogue and build strategic alliances with different actors to tackle neglected and emerging humanitarian issues.

Mr. Annan also serves in the Africa Progress Panel, the United Nations Foundations and in the Elders Group, and chairs the Prize Committee of the Mo Ibrahim Foundation and the Board of the Alliance for a Green Revolution in Africa (AGRA).