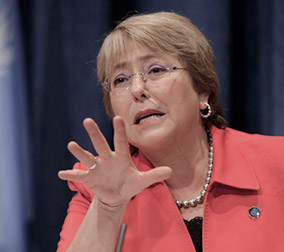 In 1982, President Bachelet graduated from the Medical School of the University of Chile, and then specialised in paediatrics and public health at the Roberto del Rio Hospital in Santiago. Later, she studied military strategy in the National Academy of Strategic and Political Studies. As a student, Ms Bachelet actively supported Salvador Allende’s Partido Socialista de Chile (PSCh) until Augusto Pinochet’s coup d’état in September of 1973 forced her to flee the country.

After some time in Australia and East Germany, she returned to Chile in 1979 to finish her medical studies, where she advocated for the restoration of democracy. Following Patricio Aylwin’s presidential victory that marked Chile’s return to democracy in 1990, Bachelet started her professional career as an epidemiologist. In 2000, Bachelet was named Minister of Health by then President and current WLA-CdM Member, Ricardo Lagos; and two years later, she moved to head the Defence Ministry, becoming the first Chilean woman to lead this branch. Following a steady rise in her polling numbers during 2004, in January 2005 Ms Bachelet accepted her party’s nomination for President. A year later, after a run-off election against the centre-right candidate, she was elected President on January 15, 2006 with 53.5 % of the votes. President Bachelet’s first term was characterised by the expansion of Chile’s Social Protection System for children, the elderly and the disabled; greater investment for education and health; labour law reforms; and gender equality as a polity of the State.

Between presidential terms, Ms Bachelet was appointed the first-ever Director of the UN Entity for Gender Equality and the Empowerment of Women, also known as UN Women, by current WLA-CdM Honorary Member, Ban Ki-moon. Thanks to a solid popularity, President Bachelet ran for the Presidency again in 2014, obtaining 62.1 % of votes in the run-off against the continuity candidate, and was sworn in March 11, 2014 at the National Congress. In this second period, she introduced free university education; new environmental policies; same sex marriage; and created the Ministry for Women and Gender Equality.

Since leaving the Presidency in March 2018, Michelle Bachelet continues to be a leading voice for human rights, gender equality, women’s issues, and democracy. On September 1st 2018, following approval by the UN General Assembly, she was appointed UN High Commissioner for Human Rights by Secretary-General and WLA-CdM Member on leave, António Guterres, a post Ms Bachelet has held until August 2022.