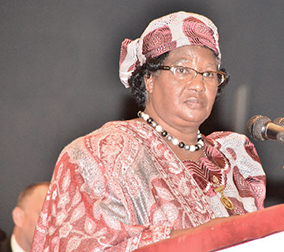 An entrepreneur, activist, politician and philanthropist, Her Excellency Joyce Banda served as the President of the Republic of Malawi from 2012-2014. She was Malawi’s first female president and Africa’s second.

Prior to assuming office, President Banda served as a Member of Parliament, Minister of Gender and Child Welfare, Foreign Minister, and Vice President of the Republic of Malawi. While serving as Minister of Gender and Child Welfare, she championed the enactment of The Prevention of Domestic Violence Bill (2006), which provided the legal framework to support the prevention and elimination of all forms of violence against women and girls.

President Banda is credited for turning around an ailing economy which was on the verge of collapse in April 2012. She instituted a number of economic reforms which led to significant economic expansion; Malawi’s rate of economic growth rose from 1.8% in 2012 to over 6.2% in 2014. In the areas of democracy, good governance, and rule of law, President Banda repealed a number of draconian laws which weakened essential democratic institutions, infringed upon civil liberties, and restricted the freedom of the press.

President Banda’s unwavering commitment to the promotion of women’s maternal health and reproductive rights led her to establish the Presidential Initiative on Maternal Health and Safe Motherhood, which spearheaded the fight against high maternal mortality rates and the promotion of safe motherhood in Malawi. During the two years of her presidency, Malawi registered considerable success in the areas of maternal and child health, reducing the maternal mortality ratio from 675 deaths per 100,000 live births to 460, a reduction of 32%.

President Banda is an international speaker on leadership, democracy, good governance, and women’s and girl’s rights and motivational speaker.  She has delivered numerous lectures at universities including Harvard Medical School and the Kennedy School of Politics, the London School of Economics and Political Science, George Washington University, Kansas State University, among others.