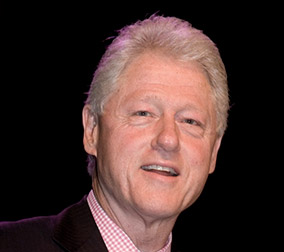 William Clinton holds a BS in International Affairs from Georgetown University, Washington D.C. (1968) and a PhD from Yale Law School (1973). He studied at Oxford University in 1968 as a Rhodes Scholar.

William Jefferson Clinton was the first Democratic president in six decades to be elected twice — first in 1992 and then in 1996. Under his leadership, the country enjoyed the strongest economy in a generation and the longest economic expansion in United States history. President Clinton’s core values of building community, creating opportunity, and demanding responsibility resulted in unprecedented progress for America, including moving the nation from record deficits to record surpluses; the creation of over 22 million jobs — more than any other administration; low levels of unemployment, poverty and crime; and the highest home ownership and college enrollment rates in history.

President Clinton’s accomplishments in the White House include increasing investment in education, providing tax relief for working families, helping millions of Americans move from welfare to work, expanding access to technology, encouraging investment in underserved communities, protecting the environment, countering the threat of terrorism and promoting peace and strengthening democracy around the world. His administration’s economic policies fostered the largest peacetime economic expansion in history.

President Clinton previously served as the governor of Arkansas, chairman of the National Governors’ Association and attorney general of Arkansas. As former chairman of the Democratic Leadership Council, he is one of the original architects and leading advocates of the Third Way movement.

After leaving the White House, President Clinton established the William J. Clinton Foundation with the mission to strengthen the capacity of people in the United States and throughout the world to meet the challenges of global interdependence. Today the Foundation has staff and volunteers around the world working to improve lives through several initiatives, including the Clinton Health Access Initiative (formerly the Clinton HIV/AIDS Initiative), a separate non-profit organization, which is helping 2.6 million people living with HIV/AIDS access lifesaving drugs. Other initiatives — including the Clinton Climate Initiative, the Clinton Hunter Development Initiative, the Clinton Giustra Sustainable Growth Initiative, and the Clinton Economic Opportunity Initiative — are applying a business-oriented approach worldwide to fight climate change and develop sustainable economic growth in Africa and Latin America. The Clinton Global Initiative brings together global leaders to devise and implement innovative solutions to some of the world’s most pressing issues. In the United States, the Foundation is working to combat the alarming rise in childhood obesity through the Alliance for a Healthier Generation and is helping individuals and families succeed and small businesses grow.

In addition to his Foundation work, President Clinton has joined with former President George H.W. Bush three times — after the 2004 tsunami in South Asia, Hurricane Katrina in 2005, and Hurricane Ike in 2008 — to help raise money for recovery efforts. He also served as the UN Envoy for Tsunami Recovery and is now the UN Special Envoy to Haiti to assist its people and government as they “build back better” from recent storm and earthquake damages and implement their economic vision for the future.