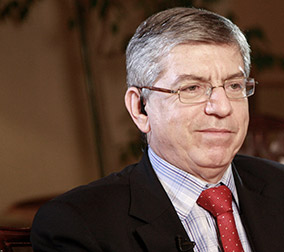 César Gaviria received a Degree in Economics from the University of the Andes in Bogotá.

From 1983 to 1986, César Gaviria was a columnist for El Tiempo and Director of La Tarde.

César Gaviria began his political career as city councilor for the Liberal Party (PL) in 1970, where he served until 1975. In 1974 he was elected member of the House of Representatives of Colombia for the district of Risaralda and was re-elected to the position every four years until 1990. From 1975 to 1976 he was both Representative of Risaralda and Mayor of Pereira.

In 1986 he became Deputy Manager of the Liberal Party and directed Virgilio Barco’s presidential campaign. When Barco became President later that year, César Gaviria served as Minister of Finance and Public Credit (1986-1987), Minister of Justice (1987-1988) and Minister of the Government (1987-1989). During his time in the administration, he played an important role in the peace negotiations with the M-19 guerrillas.

In 1989 he left the Barco government to direct the presidential campaign of Senator Luis Carlos Galán. After the brutal murder of Senator Galán by narcoterrorists, César Gaviria became the presidential candidate for the Liberal Party. He was elected President in May 1990 and served until 1994. During his administration he sponsored the reintegration of the rebel armed forces into civil society and pushed for the constitutional reforms of 1991. He is known in Latin America as a mediator of conflicts.

Following his presidency Mr. Gaviria was elected Secretary General of the Organization of American States (OAS) in 1994 where he served until 2004. His “New Vision of the OAS” initiated important institutional changes that gave a new vigor to the inter-American agenda and prepared the OAS for the challenges of the new millennium.