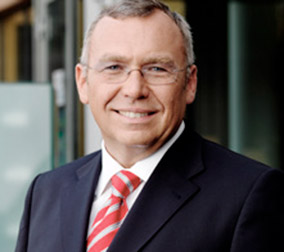 Alfred Gusenbauer was Austria’s 11th Federal Chancellor, serving between 2007 and 2008.

Dr. Gusenbauer spent his whole professional life in politics, either as an employee or as a parliamentary representative for his party, the Austria Social Democratic Party (SPÖ).

Little time after starting his law degree at the University of Vienna, he joined the federal Executive Committee of the SJÖ – the youth branch of the SPÖ. While his education focused on Philosophy and Political Science, his political career rose quickly as he was elected Executive Secretary of the SLÖ in 1981, Federal Chairman of the organization in 1984 and Vice-President of the International Youth Socialist in 1985.

In 1990, he entered the economic policy department of the Lower Austria Chamber of Labour from 1990 to 1999 and worked as a research fellow. He made the final jump to the federal political arena in February 1991, as he was elected, first, as a member of Lower Austria’s SPÖ Executive Committee and Presidium, then in the Federal Council, in the Upper House in the Parliament.

In 2000, following SPÖ’s defeat in the legislative elections, and the resignation of his President, Alfred Gusenbauer was elected the new President of his party and Leader of the Opposition.

In the 2006 elections, the SPÖ won a relative majority of the votes and after arduous negotiations formed a grand coalition with his rival party the ÖVP, with Alfred Gusenbauer chosen as Federal Chancellor. He served in this position from January 2007 until December 2008.

Since June 2010, Dr. Gusenbauer is heading the supervisory board of Strabag, Austria’s leading construction company.

Alfred Gusenbauer is the Laureate of the International Prize “Dialogue of Civilizations” for 2008.

Gusenbauer is the first Leitner Global Fellow at the Columbia University School of International and Public Affairs in New York.