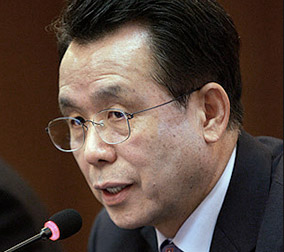 Board Of Directors Full Members Vicepresident

Dr. Han Seung-soo served as Prime Minister of Republic of Korea (2008-09). He is currently Member of the UN Secretary-General’s High-Level Panel on Global Sustainability and the UN Secretary-General’s Advisory Board on Water and Sanitation, and Chair of High-Level Expert Panel on Water and Disaster/UNSGAB. He also serves as Chair of the Global Green Growth Institute, Senior Adviser at KIM & CHANG law office, Independent Non-Executive Director of Standard Chartered plc, and Maureen and Mike Mansfield Foundation Board Member. He was Special Envoy of the UN Secretary-General on Climate Change (2007-08) and Chair of the 2009 OECD Ministerial Council Meeting in Paris where he played a pivotal role in unanimously adopting the OECD Declaration on Green Growth on 25 June 2009.

He received, among many domestic and foreign decorations and awards, Columbia Law School/Parker School Award for International Distinguished Service in 1997 and Nobel Peace Prize on behalf of the United Nations in 2001. He was awarded an Honorary Knighthood (KBE) from HM Queen Elizabeth II of the United Kingdom in 2004.

He has many publications both in Korean and English, the most recent one being Beyond the Shadow of 9/11; A Year at the United Nations General Assembly (SAIS, Washington, DC, 2007). His doctoral thesis, The Growth and Function of the European Budget was awarded the 6th European Communities Prize (1971) after being chosen through international competition as the best among 73 doctoral theses written on the European integration during 1967-69.