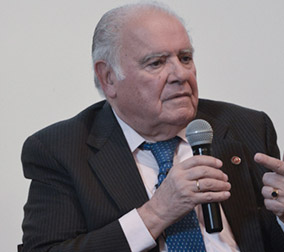 His parents emigrated to Uruguay in 1934 and Enrique was naturalized as a Uruguayan citizen. By university, Iglesias had established an interest in government and economics; in 1953, he graduated from Uruguay’s Universidad de la República with a degree in economics and business administration. After graduation, he went on to private-sector banking, which led to a long term as the president of Uruguay’s Central Bank. Iglesias held a variety of influential posts. He was Minister of Foreign Relations in the Government of Uruguay (1985-1988) before being elected president of the Inter-American Development Bank in 1988.[1] During Iglesias’s first and second terms as president, the IDB concluded negotiations for its Seventh (1989) and Eighth (1994) General Increase in Resources. Respectively, these negotiations increased the Bank’s ordinary capital by USD $26.5 billion and $101 billion.

From 2005 to 2014, he was the Secretary General of the Iberoamerican General Secretariat (SEGIB). He is now an Honorary Member of the Club de Madrid.