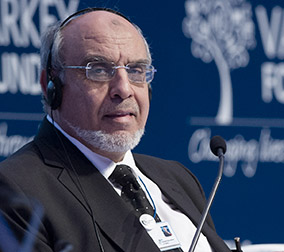 Hamadi Jebali is a Tunisian engineer, Islamist politician and journalist who was Prime Minister of Tunisia from December 2011 to March 2013.

He was the Secretary-General of the Ennahda Movement, a moderate Islamist party in Tunisia, until he left his party in December 2014 in the course of the Tunisian presidential election, 2014. Interim President Moncef Marzouki appointed Jebali as on December 2011.

On February 2013, Jebali resigned saying “Today there is a great disappointment among the people and we must regain their trust and this resignation is a first step”. The move followed his attempt to form a technocratic government following the assassination of Chokri Belaid and ensuing protests against the alleged Islamisation of the country.