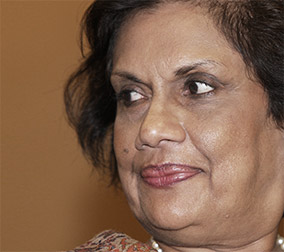 Chandrika Kumaratunga graduated in Political Science and International Relations in 1970 from the Political Science Institute (Sciences Po) of the University of Paris; holds a Diploma in Group Leadership; trained as a political journalist at ‘Le Monde’ newspaper; and undertook her PhD studies in Development Economics at the École Pratique des Hautes Études, University of Paris from 1970-1973.

When her mother Sirimavo Bandanaraike was Prime Minister, Ms. Kumaratunga served as Director Land Reforms Commission and as Chairperson of the Janawasa Commission for the alleviation of poverty. She worked as Managing Editor of the Dinakara Sinhala, a Sri Lankan Daily from 1977 to 1985. From 1976 to 1979, Ms. Kumaratunga served as an Expert Consultant to the Food and Agriculture Organisation of the United Nations.

Chandrika Kumaratunga entered mainstream politics in 1993 when elected Chief Minister of the Western Provincial Council. She became Prime Minister in August 1994 after her party won the parliamentary elections. She was elected twice as Executive President in 1994 and 1999 serving for 11 years as President. Her campaign was built on good governance, ending corruption, a negotiated political solution to the ethnic crisis and economic development for all.

Ms. Kumaratunga was the only political leader to offer a political solution to the conflict in the form of Devolution of Power to the Regions, including those inhabited by the minority communities, in the new Constitutional Proposals. This could not be implemented as the government could not obtain the required 2/3 majority in parliament.

She also implemented successful programmes to bring about Understanding and Social Cohesion among the diverse communities in Lanka. – the number of majority Sinhala opting for Peace, Dialogue and a Negotiated Solution to the ethnic problem  increased from 23 % to 68 % in two years. Her government developed much of the neglected Northern and Eastern districts. When the LTTE resumed its armed conflict, Kumaratunga urged the government forces to exercise caution and to minimize civilian casualties. Even after the LTTE attempted to kill her, Kumaratunga persisted in her for Peace. A landmark agreement was signed between Government and the LTTE in June 2005.

President Kumaratunga is Director of the South Asia Foundation and is Chair of the CBK Foundation for Democracy and Justice which she created in 2008.