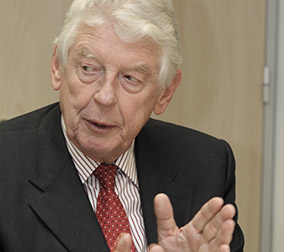 Wim Kok graduated from the Nijenrode Business School in the Netherlands (1958).

Wim Kok served in the military of the Netherlands after Business School. In 1961 he was appointed assistant international officer of the Netherlands Federation of Trade Unions (NVV), a socialist trade union confederation. He served as chairman of NVV and (after a merger with the catholic trade union federation NKV) of FNV from 1973 until 1985. From 1979 to 1982 he also held the position of Chairman of the European Trade Union Confederation. He was Deputy Chairman of the Socioeconomic Council (SER) and Chairman of the employee´s representatives in the Foundation of Labour. From 1985 to 1986 he was visiting lecturer at the Institute of Social Studies and advisor to the President of the European Commission.

In 1986 Wim Kok became both a member of the Lower House of Parliament and the leader of the Labour Party (PvdA). From 1986 to 1989 he was Leader of the opposition in the Dutch Parliament; in 1989 he was elected one of the deputy chairmen of the Socialist International. From 1986 to 1994 he served as Minister of Finance and Deputy Prime Minister. Mr. Kok was elected Prime Minister and Minister of General Affairs of the Netherlands in 1994 and was reelected for a second term in 1998, positions which he held until 2002.

After having stepped down as Prime Minister he served as a supervisory board member in a large number of companies such as ING Group, Royal Dutch Shell, TNT, KLM, Stork and Post NL and as member of boards of trustees of a large number of national and international not-for-profit organisations. In 2003 and 2004 Mr. Kok advised the European Council and Commission on revitalizing the European economy.