Zlatko Lagumdzija- former PM of Bosnia and Herzegovina - spoke atan event with the New Economics Foundation, and later on, along Wim Kok - former PM of The Netherlands - visited Westminster to advocate for the SDGs at the House of Lords

Wim Kok – former PM of the Netherlands – and Zlatko Lagumdzija- former PM of Bosnia and Herzegovina – recently led a mission to London and Oxford as part of the project Shared Societies.

The theme of the mission was Strategy on Environmental Sustainability and Shared Societies. The mission led multiple round table discussions and met with various international organizations, government leaders, and civil society actors.

In a discussion with the New Economics Foundation and Academics Stand Against Poverty the group discussed what different countries can learn from each other to build a more inclusive society. 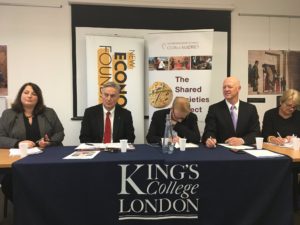 Former PM of Bosnia and member of the World Leadership Alliance – Club de Madrid, Zlatko Lagumdzija,  speaks of the Shared Societies Project at an event with the New Economic Foundation

Former PM Lagumdzija reflected that there is still work to be done, saying “Compared to the days when the wall of Berlin fell, we are four times wealthier, two times smarter, 300 times more technologically productive but still…we are in a mess”

Mr. Lagumdzija also spoke with the Thomson Reuters Foundation and the Guardian Editorial Board on promoting diversity and inclusion, common values that must shape the future of good governance. Later in the day the mission met with local groups NESTA UK and SOI Futures to discuss how technology might contribute to more inclusive societies and the issue of shared societies and hate speech. 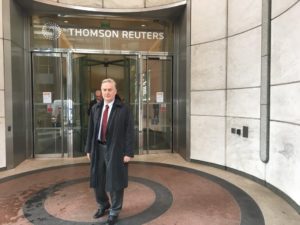 In a meeting with local government organized by Lord McConnell, Co-Chair of the All Parliamentary Group on Global Goals (APPG), Mr. Kok and the members of the AAPG addressed the social dimensions of the Agenda 2030. During a debate on the multi-stakeholder approach to achieving the Sustainable Development Goals, Mr. Kok emphasized the progress made so far, noting “we do have more opportunities at the local level to achieving partnerships on inclusion and sustainable goals”. On the last day of the mission Mr. Kok and Mr.Lagumdzija led a meeting at the Blavatnik School of Government in Oxford. They shared their insights on how to build socially inclusive and environmentally sustainable societies, explaining their own experiences with the challenges of governance. 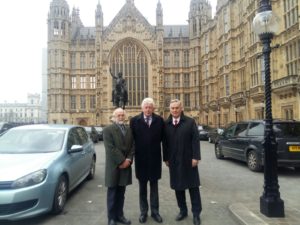 « Club de Madrid Members will discuss Sustainable Development, Conflict Prevention and Migration at the World Bank Fragility Forum and at the United Nations
Vaira Vīķe-Freiberga on Women’s Day: “Dear girls & women: follow fearlessly the path that each of you have chosen as your own!” »