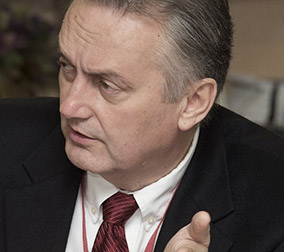 Zlatko Lagumdžija was Prime Minister of Bosnia and Herzegovina (2001-2002).

Born in Sarajevo in 1955, Mr Lagumdžija has over 30 years of top academic and political experience, including senior level functions in the Government of Bosnia and Herzegovina. He holds a Ph.D. in Computer Science and Electrical Engineering in the University of Sarajevo in 1988 and, the following year he received a postdoctoral Fulbright scholarship and research at MIS Department and CCIT in the University of Arizona, Tucson. Mr Lagumdžija continued to pursue his academic interests in MIS and Group Support Systems, writing many articles and books on the subject and directing the Management and Information Technology Center at the University of Sarajevo since 1995.

At the 2000 elections he backed former Prime Minister Haris Silajdžić and joined his Alliance for Change political manifesto, and was one of the only parties running on a multi-ethnic platform. He was subsequently nominated as Foreign Minister, representing Bosnia and Herzegovina abroad until 2003. In 2001, he was finally elected to the post of Chairman of the Council of Ministers of Bosnia and Herzegovina (the highest political office in the Republic, equivalent to the post of Prime Minister). His party, the SDP, had a manifesto of economic reform, anti-corruption, multi-ethnicity and democratization, and was seen as the most “western” of the major political parties. His appointment was greeted in the international community as the “face of a united, pluralistic Bosnia”.

As Prime Minister, he encouraged economic reform, the rebuilding of infrastructure and the re-launching of the economy, and presided over the continued assertion of the rule of law over the Republic. His government was associated by international commentators with the lifting of the profile of Bosnia and Herzegovina abroad. Unfortunately, he did not last long enough in government to see the reforms through, as his party was defeated by nationalist opposition in 2002 elections.

After leaving national politics, Mr Lagumzdija used his experience and credibility as a top diplomat on the international stage, advising foreign governments and international organizations on peace-keeping, democratization and development in the Balkans as well as around the world. He served as an observer for the International Mission on the 1998 elections in Pakistan, the first international mission to Iraq after the fall of Saddam Hussein in 2003 and the National Democratic Institute’s (NDI) pre-election mission in Afghanistan in 2004. Mr Lagumzdija is also active in the World Economic Forum’s initiative “Global Leaders for Tomorrow”, serves on the International Advisory Committee for the Congress of Democrats from the Islamic World since 2004, and is a member of the Club of Madrid, Member of the Board of Trustees of Nizami International Center, Member of Board of Boston Global Forum-Artificial Intelligence World Society (AIWS), and Co-Author of Social Contract for Age of Artificial Intelligence.

He has been bestowed with many academic honors from various institutions for his work both in politics and international relations and for his research in Information Technology, and is often involved as a guest speaker in international conferences. Mr Lagumzdija founded Shared Societies and Values Sarajevo Foundation.