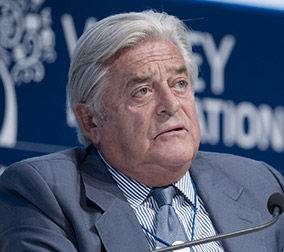 Date and Place of birth:

Luis Lacalle graduated with a Law degree from the School of Law and Social Sciences at the Universidad de la República Oriental del Uruguay (1974).

Beginning in 1961, Luis Lacalle worked as a journalist for the daily newspaper Clarín. He is currently a contributor of El Debate of Montevideo; columnist of Correo de los Viernes and La Patria de Montevideo, as well as of the Spanish newspaper ABC.

Luis Lacalle became affiliated with the Partido Nacional (Blanco) at the age of seventeen. His political career began when he was elected Member of the Parliament of Montevideo, a position which he held until the military coup d’état of 1973. When democracy was restored to Uruguay in 1984, Mr. Lacalle became both a Senator and Vice president of the Senate where he participated in the Public Funds, Transportation, and Public Works committees.

He was elected President of Uruguay in November of 1989 and formally entered the position on March 1st, 1990 to serve the five-year term from 1990 to 1995. His administration is known for having implemented a free market program; during his term in office Luis Lacalle, along with his colleagues in Brazil, Paraguay, and Argentina, co-founded the MERCOSUR which was established by the Treaty of Asunción on March 26th 1991.

He has been President of the National Party (Partido Nacional) on two occasions; between 1999 and 2004, and from August 2009. He was a candidate in the 2009 presidential elections but lost to José Mujica. He currently still serves in the Uruguayan Senate.