Carl Bildt: “The outcome of technological conflicts will shape the future”

Carl Bildt, the former PM of Sweden, spoke on current technological conflicts, the outcome of which, he thinks, will shape the future. Find below some interventions by other Members:

Historically, those that have the technology, decide the rules, Carl Bildt believes. To support this idea, the former Prime Minister of Sweden, who is a WLA-CdM Member (though he was attending the Raisina Dialogues on a personal capacity), invited the audience to think about the industrial age. Those that had the technology, set the rules of that particular age. “What made the Brits rule the world? They had the steam engine”, he said.

At the moment, the former PM of Sweden sees a technological “war” between America and China. They both have their own models. The Chinese built the Great Firewall, control everything inside, and then expand. Americans try to block the Chinese. “I don’t think these approaches are going the work long-time”, said Bildt in the Raisina Dialogues.

States seeking to influence the technological camp should aspire to do their digital transformation better than others. PM Bildt said he was impressed about India’s digitalisation efforts, which have placed emphasis in affordability and accessibility. “Where the world’s greatest democracy moves at the beginning of the digital age will shape a lot of that techno-conflict that we see emerging about the Chinese and the Americans. If it goes astray, it will be detrimental”, he added.

Contrary to the past, when technological progress was fuelled by the steam or combustion engine, digital transformation needs brainpower. “You need brains. You need talent. Societies that get freedom for that talent (freedom of entrepreneurship and rules of the game), science, education… Those things don’t depend on natural resources”, Bildt said. 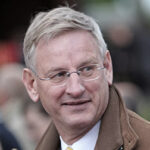 « Han Seung-soo: “We need a paradigm shift in our growth models”
Female leaders in the 21st century with Helen Clark »