Multilateralism is the best means we know to solve challenges together, ensuring an equal participation of all in world affairs. Contribute to UN75 and help us come up with multilateralism 2.0

Our world is getting more complex. We face a myriad of problems in a rapidly changing reality. From climate change to COVID-19, all our mounting challenges are a stark reminder that we need more global cooperation.

Every country for itself is not going to work. At the same time, one or few countries cannot act in the name of all either. Multilateralism is the best means we know to solve challenges together, ensuring an equal participation of all in world affairs. This is the modern thing to do. The use of force or the implementation of national-grown solutions to challenges that are transnational in their nature are remnants of the past. No country today can live in isolation.

And yet the current multilateral system has not been updated for long. We need to come up with a multilateralism 2.0, an enhanced institutional setting that breathes new life and reflects new realities. This is why Club de Madrid started its Multilateralism and Global Cooperation pillar, to promote a renewed and more inclusive form of multilateralism. We need a multilateralism system that delivers, for states and for the people.

Have your say. Be the change

To mark its 75th anniversary, the United Nations has launched a consultative process that seeks all views in order to establish global priorities now and going forward. The concerns and ideas expressed in the survey will be presented to world leaders and UN decision makers at the official commemoration of the 75th Anniversary, which will take place by the UN General Assembly in September 2020. Afterwards, institutions will discuss how to take forward the priorities and proposals generated.

Your views matter, so please contribute to the process by answering the one-minute survey below.

UN2020 activity. Danilo Türk, President of Club de Madrid spoke at an activity organised by UN2020 to analyze how a networked and inclusive multilateral system can contribute to fulfilling the promise of the UN75 declaration.

Eminent Person’s Letter. Members of World Leadership Alliance-Club de Madrid joined other government and UN representatives in an open letter to support the role of the United Nations ahead of the UN75 Political Declaration.

Seventy-Five Years Later. To commemorate the 75th Anniversary for the signing of the UN Charter on 26 June, President of Club de Madrid, Danilo Türk, wrote an op-ed stating that “the key to progress in multilateral cooperation and, consequently, to a more adequate global governance, lies at the regional level”.

Policies to tackle COVID-19 must be democratic, inclusive and coordinated globally. The pandemic is a transnational challenge, but it has also also brought upon us a series of associated challenges that would benefit from global cooperation: Dislocations in production/supply chains and trade networks, the need to share data at a regional or global level and new regulations in international travel; to name a few. These sorts of challenges require global solutions, yet another reminder that we must be ambitious in our thinking of a new multilateral system.

The Member States of the United Nations have also played their part in commemorating UN75 and catalyzing a momentum for change to more global cooperation by adopting a declaration on 21 September 2020.

The declaration notes the achievements of the United Nations throughout its history and points to COIVD-19 as a reminder that ” we are closely interconnected and only as strong as our weakest link”.

“Multilateralism is not an option but a necessity as we build back better for a more equal, more resilient, and more sustainable world. The United Nations must be at the centre of our efforts”, notes the declaration. Read the full version below.

The former Heads of State and Government that make Club de Madrid’s Membership are contributing to this global conversation for the creation of a cooperation dynamic between nations. Watch their views in the videos below:

Members of @ClubdeMadrid advocate for a strong, inclusive and rules-based multilateral system for the global community. #MultilateralismMatters #MakeUN75Count #UN75

Check out how we plan to strengthen multilateralism: https://t.co/6H8nElhAKZ pic.twitter.com/doxtKLp3kQ

On #UNCharterDay 🇺🇳, @ClubdeMadrid & @JoinUN75 invite you the 🌍’s largest conversation on our common future 🤝

The UN at 75: Now is the Time to “Build Back Better” by Fabrizio Hochschild, Special Adviser on the Preparations for the Commemoration of the Seventy-Fifth Anniversary of the United Nations. 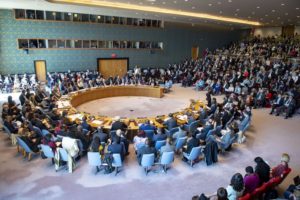